After a three-year hiatus, the Economic Development Incubator Fair returned to the Stony Brook University campus on June 8, gathering an eclectic group of more than 50 companies from the university’s incubation system to spend a morning connecting with other businesses and the local community, as well as financiers and investors.

Held at the Center of Excellence in Wireless and Information Technology (CEWIT) in the Research and Development Park, the showcase featured products ranging from AI-powered data analytics and oral cancer treatments to handcrafted coffee and cake.

“We are very pleased with the return of the in-person show,” said Peter Donnelly, associate vice president of technology partnerships for the Stony Brook Department of Economic Development. “The event achieved exactly what we wanted – providing a platform for the ecosystem for entrepreneurs, investors, faculty, students, government and many others to meet and meet friends and colleagues, make new connections, and learn what’s new. This not only showcased a thriving component of the community, but also facilitated The many conversations we want in building a thriving innovation ecosystem.”

Stony Brook University incubators include the Advanced Energy Research and Technology Center (AERTC) and the Center for Excellence in Information and Wireless Communications Technology (CEWIT) in the Research and Development Park. Long Island High Technology Incubator (LIHTI) on the Eastern Campus; Biotechnology Center on the West Campus; and a food business incubator in Calverton Business Park on the East End. Each incubator offers workshops, business development assistance, mentorship from established companies, laboratories for research and professional meeting space, as well as camaraderie for other companies growing within the incubators.

Show pictures from the interface:

Showcase exhibitors represent a wide range of companies in the fields of biotechnology, energy, information technology and food.

Alpha-1 Biologics is developing a patented biotechnology related to the generation of immune cells from stem cells within the body for the treatment of immunodeficiency with a focus on the treatment of cancer, HIV/AIDS and cardiovascular disease.

The company was founded in 2011 by Cynthia Bristow, who holds a PhD in basic and clinical immunology and microbiology, and held research positions in academia prior to founding Alpha-1 Biologics. She moved her lab from Weill Cornell Medical Center to Stony Brook because she was impressed with the incubator program and its focus on biotechnology. She said she has successfully developed an oral drug that raises the number of immune cells and stops tumor growth in mice. 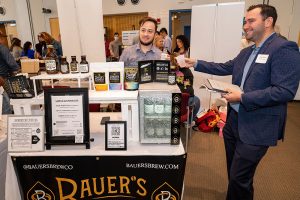 “We’ve learned a lot about the immune system and have developed thousands of drugs to treat inflammation, but nothing yet that cures immunodeficiency,” Bristow said. This is the first drug that can boost the immune system. Studies have shown that our drug is effective in mice. Right now we’re looking at kidney cancer and colon cancer.”

In the fall, Bristow hopes to conduct studies of the toxins in mice and then approach the Food and Drug Administration to see what is needed to gain approval.

Akai Kaeru, headed by Klaus Muller, a professor in the Department of Computer Science at Stony Brook, works to uncover relationships hidden in high-dimensional data and turn them into actionable information. The company was founded in 2016 to develop hands-on software to help data scientists solve critical problems in real-world applications.

“I’ve been doing this for 20 years,” Mueller said. “This is an area that we developed in a research lab, and made it more usable by the general public.”

Mueller said the company’s AK Analyst software can be applied in almost any field, citing COVID research as an example.

“You can find patterns in certain populations,” he said. “For example, early in the pandemic, the CDC was trying to spot vulnerabilities and risks as quickly as possible. The ability to analyze a huge set of data might be valuable in such a situation where there are 3,000 counties and 500 different social indicators. Possessing this knowledge could have prevented many people from dying.”

It can be a valuable predictive tool for medical treatment in general, and can also be used as an investment or business tool, Muller said. 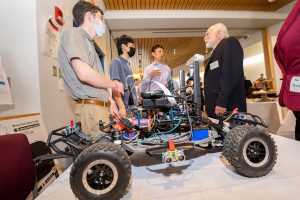 Mike Bauer, owner and founder of Bauer’s Brew in Calverton, Long Island, was one of more than a dozen food entrepreneurs at the event. Bauer said he started his coffee business in 2020 during the COVID pandemic.

“I had a business of personal training and football training, and when the Covid virus hit, it got really tough,” Bauer said. “I’ve been struggling with coffee as a hobby for a very long time and loved making my own latte and being my home barista. So I turned my hobby into a business.”

While he was working on starting his new business, he began looking for a suitable place to manufacture his product and found the Stony Brook Incubator in Calverton. Two years later, Bauer sells his cold brew online and in bulk to retailers. He uses a roasting area in Brooklyn and brings roasted coffee to the incubator. Everything else is done under one roof.

“We’re doing very well in Montauk, which is a beach town,” Bauer said. “I find it in most takeaways and restaurants out there and bring them in elsewhere on Long Island.”

To go along with the coffee, of course, were the donuts, courtesy of the North Fork Donut Company. The company was started four years ago by a husband-and-wife team consisting of Jimmy Lyons and Kelly Brigucci, who saw a specialty donut spot featuring the freshest, local ingredients.

“We thought an incubator might be a good fit for us and it worked really well,” Lyons said. “We’ve been there for nearly two years.”

The company now sells cakes from two locations on the eastern tip of Long Island and makes all of its products in the Calverton Incubator.

“We also have a partner store in Connecticut and are opening a store in the Bronx this summer,” Lyons said. “So we are busy now.”