COVINA, CA – Several years ago, Sam Howland was reading an ice cream cookbook when an interesting recipe caught his eye.

It was the recipe for Guinness Stout Chocolate Ice Cream – two things Howland loved in one.

What you need to know

Howland, who at the time was working as a craft brewer, created that recipe.

And then, try one of his creations. He poured an amber beer into a batch of vanilla ice cream with malt balls.

“I remember thinking, ‘There is something to this,'” Howland said.

And after plenty of trial and error, failures, awards, and a loyal following, the two friends and their college mates opened their first ice cream shop earlier this month that marries the two things they love most: beer/soul and ice cream.

Howland and Marasco held a grand opening of Scoops on Tap in downtown Covina and cut the ribbon Thursday, and the new ice cream shop is giving old-fashioned ice cream a new look and adult flavor.

“There is a perception that ice cream is only for children and families, but we have always felt that ice cream should be available to everyone,” Holland said.

On National Ice Cream Day, Sunday, the store will offer discounts on ice cream and give away freebies and gift cards.

The 800-square-foot ice cream shop with a 250-square-foot patio at 491 North Citrus Ave. It features ice cream flavors from traditional flavors like strawberry, cream, and chocolate paste to those with a touch of spirit.

There are chocolate cookies and strong ice cream – Dutch dark chocolate ice cream with fudge, chunks of Oreos and filled with chocolate fudge.

Rarely seen by visitors at other ice cream stores, Scoops on Tap has a 21-plus wine and beer bar and the staff can recommend ice cream pairings with beer or wine. 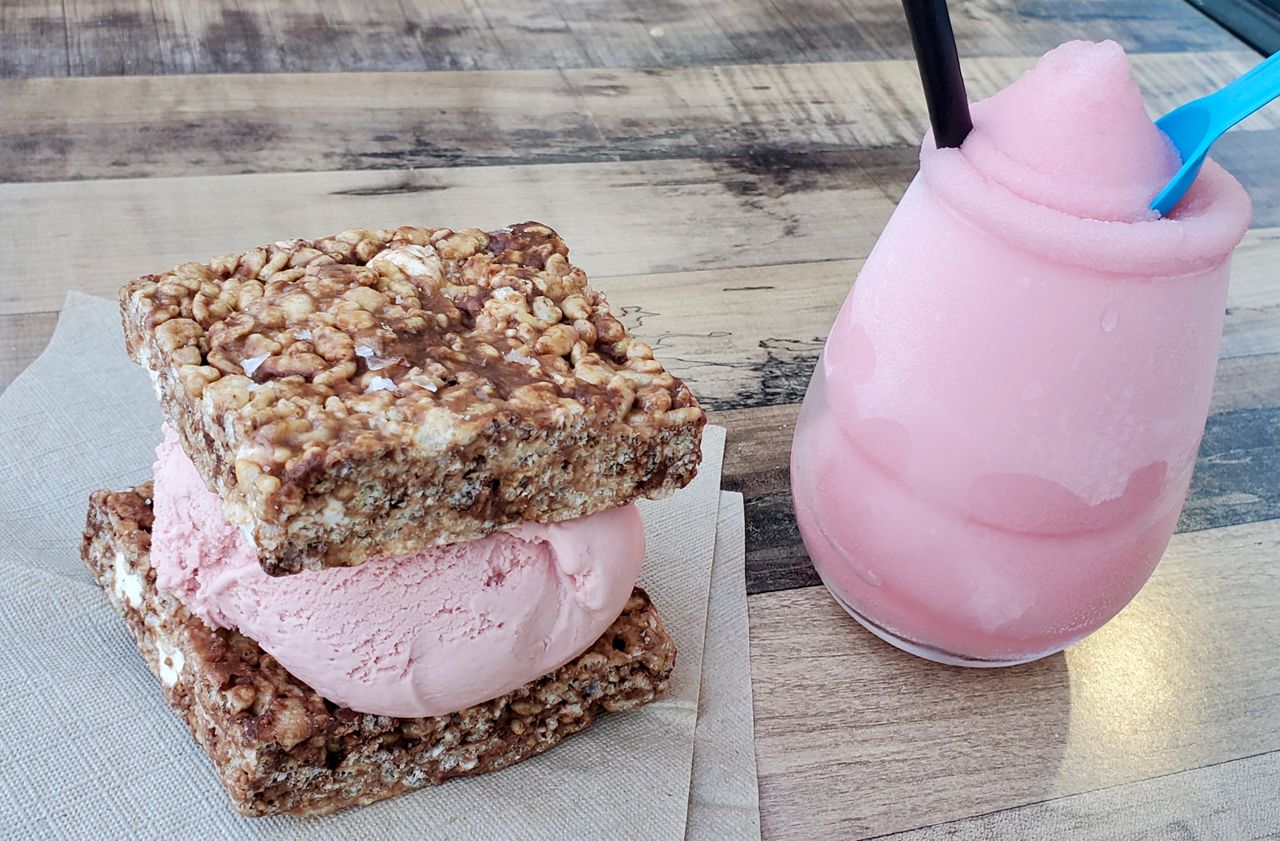 The shop also offers wine-infused liqueurs such as Frosé lemonade, and California Rosé mixed with fresh and frozen lemon juice in the form of a slush. And any of their ice cream can be made into a handcrafted beer float.

Howland said Scoops on Tap ice cream is for everyone. Spirit filled ice cream is classified as non-alcoholic because they only use a small amount of craft beer in the recipe.

Aside from its soul-filling ice cream, Scoops on Tap is known for its vegan and low-sugar Keto ice cream.

The vegan ice cream has a coconut base, Holland said, and is “as creamy as regular ice cream.” “The Keto List is sugar-free, high-fat, and low-carb.”

The opening of Scoops on Tap coincides with the revival of downtown Covina. Several city council members were present during the ribbon cutting Thursday and talked about how the area is changing. 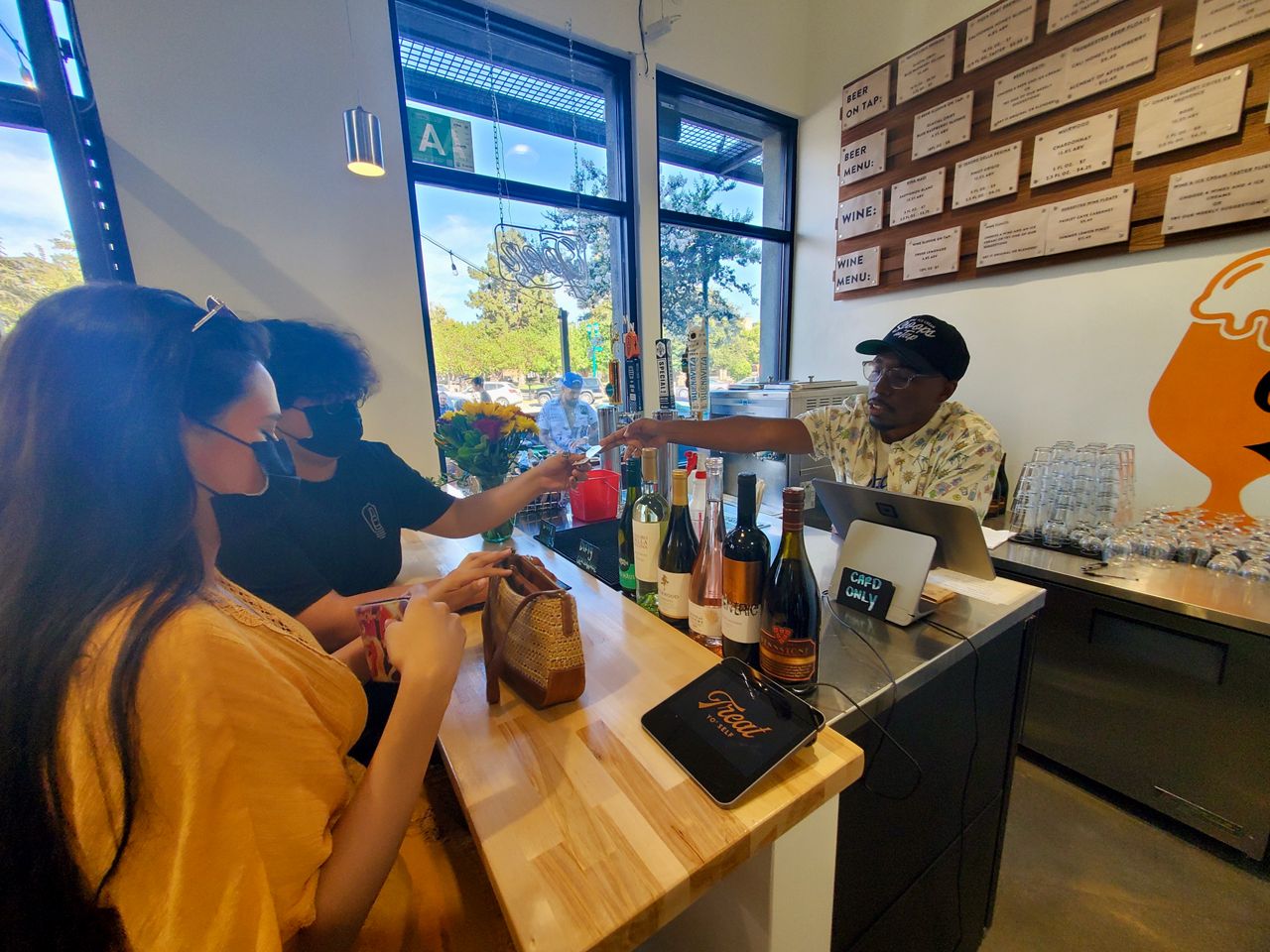 “A few years ago, it was very quiet. There were a lot of empty storefronts,” said John King, a 50-year-old Covina resident and city councilor. “Now, we’re seeing business come back. Downtown is getting a lot more lively. It’s walkable, great city feel downtown because of these kinds of upcoming businesses like Scoops on Tap, Dot & Dough and others.”

For Howland and Marasco, who both attended Cal Poly Pomona, in some ways, opening this store was a homecoming. Howland and his business partner Marasco lived in Covina while attending Cal Poly, about a 10-minute drive away.

“When we were looking for places, it was important for us to be part of the community,” Howland said. “We wanted to be your local ice cream shop, and with downtown Covina revitalized, there’s no better place than here.”