Patricio “Pato” Peñalusa is known for his passion – his tacos. That’s why, when he moved to Denver from Mexico City last year, he channeled that passion into creating an authentic Mexican-style taqueria. Pato’s Tacos, at 5038 East Colfax Avenue, opened March 17 to attract feedback from those who visited: All 71 Google reviews so far have given the place five stars.

Most people don’t associate Mexican food with St. Patrick’s Day celebrations, but Benalusa wanted to open his restaurant on a day named after him. After setbacks with complicated permits due to the pandemic, Benalusa and his business partner, Chef Renee Gonzalez, have celebrated Irish Feast the only way they know how – with tacos.

The restaurant has a relatively short menu centered around a dozen types of tacos, including beef, pork, and chicken, as well as vegetarian and vegan options. “It may sound very simple, but behind it is a lot of creativity that we have adopted and modified from Mexican street food,” Pinalusa explains, adding that the recipes are modeled after the most authentic form of street food: people serving tacos out of the trunks of their cars. Some sides are also available, such as nopales (cactus), Frijoles charro (beans with bacon) and chiles en vinagre (pickled jalapeños).

Many meat options have vegetarian alternatives, such as soy chorizo.

Penalosa and Gonzalez met in the world of fine dining in Mexico City, where Penalosa had worked for thirty years, most recently at a sushi restaurant. When it became clear that reopening a large space would be difficult due to COVID restrictions, Penalosa decided to join his daughter in Denver to start over. For this reason, I kept the concept intentionally simple: a smaller menu, more basic space and a two-person team. “It’s very different from what we’re used to,” he says. “We’re getting rid of a lot of things and getting simpler than we’ve been doing for years.”

One thing connects his previous endeavors with the new: feeding people, which is what he wants to do in the most authentic way possible. The basic foundation of tacos? Tortillas, of course. “I focused on finding good, original tortillas. It’s the most important ingredient—neither tortilla nor taco,” Penalosa explains. The cornflakes he uses are made from scratch and are bigger and sturdier than one would normally find.

The restaurant matches the menu in size; It can only host twelve people at a time. But even with a crew of two, Penalosa and Gonzalez make efficient use of the space. Customers can expect the table to be set with salsa when seated after ordering, and the food will be served within three minutes. “It’s time to eat, not time to wait,” Benalusa says.

He is just as passionate about serving as tacos, and sees food as a way to connect with society. “We leave the check open,” he says. People have forgotten to pay, but I don’t chase them, because I know they’ll come back. Feeding people, you become an extension of their homes.” 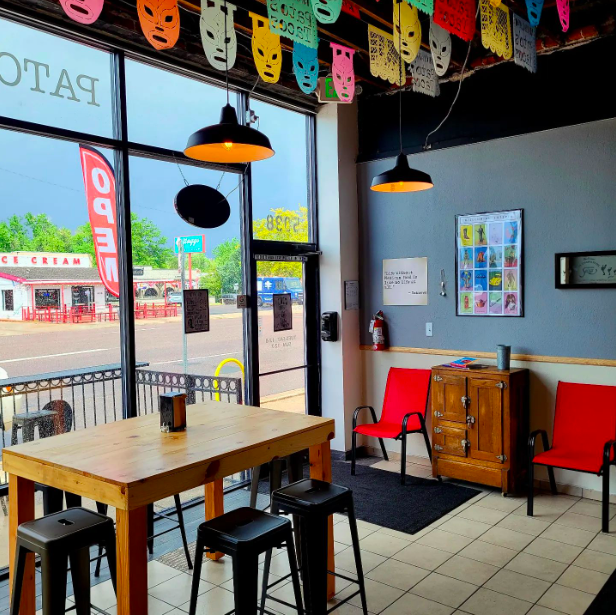 The interior is brightly decorated with elements inspired by lucha libre, a form of Mexican wrestling in which participants wear masks as a way to conceal their identities. Penalosa chose the theme as a way to make mask delegates fun without making fun of them. “We thought: Let’s make it something fun and in Mexican tradition,” he explains. “Things on the walls will make you laugh, and these are a good garnish. Laughter opens your senses.”

In keeping with keeping things simple, the tacos and sides are all the same price: $5. They’re great tacos, and for that reason, Penalosa recommends customers start with just one. The most popular offerings are Pato’s Especial: a tortilla topped with fresh guacamole and chicharon. “It’s very simple, because you can notice the quality of the tortillas and the ingredients we use to make the guacamole,” Penalosa notes. The other is filled with a Yucatan-style soup with cochinita (roasted pork), which is pulled out after four to six hours in the oven and flavored with achott, garlic, onion, and orange juice.

“In the end, you do what you want with what you have. It’s not a matter of money, it’s a matter of creativity, and that makes it so much fun. And we have a lot of fun. That’s important to me. When you enjoy what you’re doing, the rest is just a benefit.”

Pato’s Tacos is located at 5038 East Colfax Avenue and is open from noon to 8 p.m. Tuesday through Saturday and noon to 7 p.m. Sunday. For more information, visit her Instagram page, @patostacos2020.