The Oakland Museum in California should see an increase in food-loving visitors thanks to a well-known chef taking over the menu at Town Fare Cafe, the restaurant within OMCA. The chef behind former San Francisco-based Gussie’s Chicken and Waffles, Michelle McQueen, now operates the ship at Town Fare and her new menu is now making its debut. “McQueen’s new menu for Town Fare pays homage to her family’s roots and upbringing in Auckland and aims to bring together flavors from diverse cultures within the local community,” the museum’s website reads.

Town Fare Café has been in somewhat of a limbo since celebrity chef Tanya Holland left the restaurant in January. Since then, the menu has become Hawaiian-themed thanks to Hawaiian chef Puaokalani Barquis, who was hired as a temporary fill-in until the museum made a permanent hire. With the addition of McQueen, the restaurant now appears to have a clear trend, which is centered around Southern food but includes other influences. “Her approach to food and hospitality is well suited to OMCA – both embodying a deep commitment to bringing people together through art, history and science through the ‘City Glow’ that is Auckland’s signature,” OMCA CEO Laurie Fogarty said in a statement to SFGate.

Of course, McQueen’s new menu features expertly made fried chicken, which she was called upon through her work at Gussie’s and while operating the Northern California location of Roscoe’s Chicken & Waffles chain in Los Angeles. Town Fare’s fried chicken comes with red beans, chow chow, rice, and cornbread. Other appetizers include grilled salmon with field pea succotash, chicken sausage, shrimp, and grits. On the appetizer side, you’ll find fried green tomato caprese salad, and dips with Southern flare, like black pea hummus, collard greens, and sweet pepper cheese dip. “Auckland represents so many different cultures and I want the menu at Town Fare to be a reflection of that,” McQueen said in a statement. 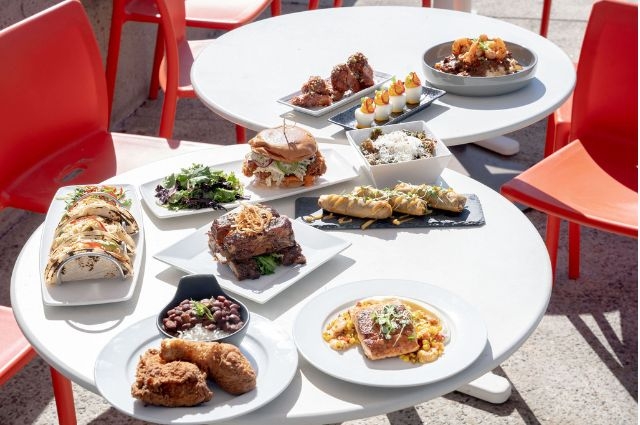 There will also be a full list of beers, wines and cocktails from Black-owned businesses including Uncle Nearest Premium Whiskey, Hella Coastal Brewery and Wachira Wines. According to Eater, “McQueen has also teamed up with Sadé Stamps of SweetWater Consulting on a cocktail menu with options like Bissap Rum Punch made with sorrel and spices, and Hot Oaxaca, a blend of mezcal, watermelon sangrita, and Guajillo chiles.”

Alongside McQueen’s debut, comes the new large dining area on the sun deck at Town Fare Cafe that has an outdoor bar and room for 45 guests. It will be open from 5-9 pm Thursday through Saturday, with cocktails and a limited menu. The indoor café is open Wednesday through Sunday from 11am-5pm. The café and patio are both open to the public without the need for a ticket to the museum.