Speaking in “UK Market: Unleashing Great Potential by Leveraging the Advantages of UKVFTA,” Oliver Todd, British Consul General in HCM City, said that Vietnam could replace other countries such as India and Indonesia as a major supplier of agricultural and aquaculture products. for his country.

Todd, who is also the UK’s director of trade and investment in Vietnam, said Vietnamese exporters must be well prepared if they want to increase exports to their chosen market. He said that it is important to know the import demand, its standards and requirements for export to the British market.

Chris Milliken, Vice-President of the British Chamber of Commerce in Vietnam (Bricham), said there is plenty of scope for bilateral trade development thanks to the trade deal.

Vietnam and the United Kingdom do not compete with each other in any industry; They complement each other commercially.”

He referred to the FTA as the main pillar of the joint commitment to deepen bilateral trade, saying it is a reciprocal agreement to take bilateral trade to the next level.

He said bilateral cooperation will include renewable energy, finance, education, high technology, financial technology, and others.

He said the UK has focused in recent years on developing renewable energy sources such as wind and solar energy as part of its efforts to adapt to climate change.

He said that Vietnam should develop renewable energy, an area where the UK has strengths.

The UK recently developed an offshore wind power project in the country, which will generate enough electricity for 1.6 million homes.

Major UK energy companies are investing in solar projects in Vietnam such as Shire Oak International Group, and solar projects such as Enterprize Energy and Mainstream Group. 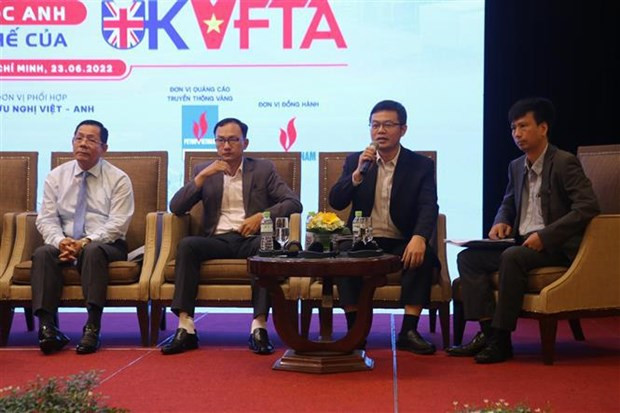 Speakers at the “UK Market: Unleashing Great Potential by Leveraging the Benefits of UKVFTA.” (Photo: VNA)

Vu Hong Kit, director of customer service at the British Standards Institute (BSI Group), said Vietnam has the potential to become a major supplier of food and agricultural products to the UK.

He added that Vietnamese exporters face challenges in finding partners and understanding the needs, quality standards and business procedures in the UK, as well as risks related to contracts and payments.

Nguyen Manh Dat, deputy director of the Food Industry Institute under the Ministry of Industry and Trade, said Vietnamese exporters should conduct thorough market research to ensure that their products are of high quality and competitive in the market.

They must also ensure transparency for their products by developing websites and providing information about products, product lines, outputs, and business partners.

Experts said that the UK is the second largest economy in Europe with a free trade policy and high demand for agricultural imports.

Although the UKVFTA agreement came into force at a difficult time largely due to the COVID-19 pandemic, the two countries managed to achieve $6.6 billion in bilateral trade last year, up 17.2% from the previous year, according to Vietnam customs figures.

In the first five months of this year, trade between the two countries amounted to $2.68 billion, equivalent to the same period last year.

As of May, 462 UK direct investment projects with a total registered capital of $4.15 billion have been approved in Vietnam, accounting for 0.97% of the country’s total foreign direct investment.

The UKVFTA agreement was signed in December 2020 in the British capital, London. It came into effect on May 1, 2021.

The conference was organized by the Ministry of Industry and Trade, the British Embassy in Vietnam and the British Chamber of Commerce in Vietnam to assist Vietnamese companies seeking to join the British supply chain. /.