The Waltz Soda fountain in downtown Damariscotta on Wednesday, July 13th. Business reopened Monday, July 4, after being closed for more than two years due to the COVID-19 pandemic. (Photos by Evan Hawke)

After a hiatus of more than two years, the Waltz Soda fountain in downtown Damariscotta reopened to local enthusiasm on Monday, July 4.

“The feedback from the community has been fantastic,” owner Dean Jacobs said on Tuesday, July 12, adding that he has had multiple interactions with year-round and summer residents, all of whom state that a soda fountain is part of their regular routine.

Dean Jacobs owns the business with his sister Kristi Jacobs. The siblings inherited the business from their parents, Jo Ann (Waltz) Jacobs and pharmacist Wenton “Wenty” Jacobs, when Waltz Pharmacy closed in 2011.

Pharmacist Burley Waltz started his business and has operated a pharmacy and soda fountain for over 50 years. His daughter, Jo Ann, who grew up in Waldoboro, was his first employee when she began working there at the age of 16.

In December 2012, renovations were made and Renys Underground was expanded to the space formerly occupied by the pharmacy. The soda fountain reopened in May 2013 with an expanded menu, before closing in March 2020. 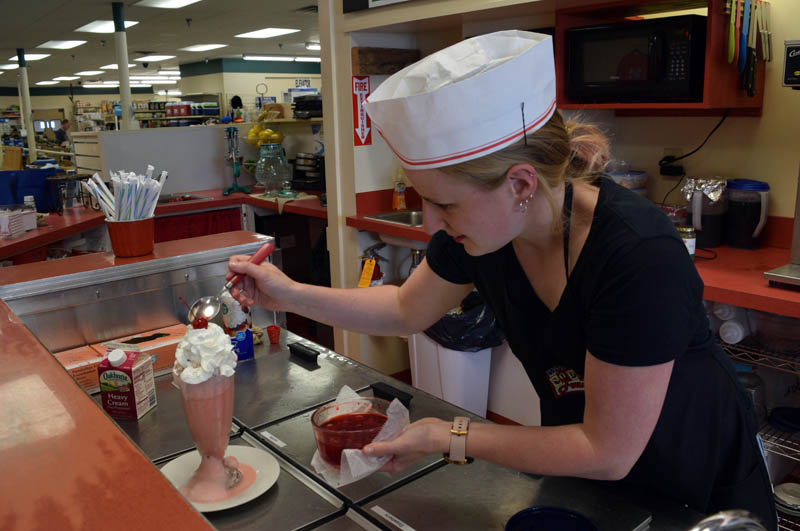 Kimberly Wagner, director of Waltz Soda Fountain, lays cherries on top of a strawberry and raspberry ice cream soda in downtown Damariscotta on Monday, July 11. Owner Dean Jacobs said he wants to focus more on ice cream as the soda fountain reopens after more than two years of closure. (Photos by Evan Hawke)

Dean’s son, Christopher Jacobs, became the fourth generation of the family to run the counter when he started this year. On Monday, July 11, the 13-year-old said it was good to work in the family business, especially in his first job.

The lunch menu is slimmer now, serving only sausage, chips, and chicken salad sandwiches. Dean Jacobs said he wants the soda fountain to focus more on ice cream now, but suspects grilled cheese will be added to the menu in the future.

Jacobs said the Waltz Soda Fountain had to close its doors in March 2020 due to the COVID-19 pandemic and waited until this month to reopen, and now COVID-19 appears to be receding in Maine.

Kimberly Wagoner is the new face behind the counter at Waltz Soda Fountain. The owners recruited her to operate the fountain for the summer and Wagner moved from Starkville, Miss., where she was studying at Mississippi State University for aerospace engineering and working in food service. 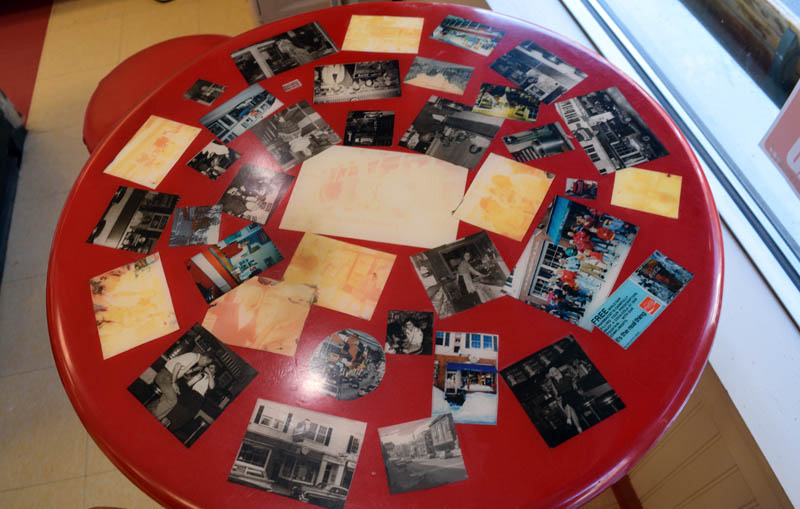 A table with old photos sits at the Waltz Soda Fountain in downtown Damariscotta on Monday, July 11. Many of the tables and chairs on the counter are original since the soda fountain and pharmacy opened in 1948. (Evan Houk photo)

“It sounds a lot better than waiting tables in Starkville,” Wagner said of why she moved to Maine for the summer.

There are some changes for this year. Juices and smoothies are no longer served, and the shop opens a little later than the previous incarnation, at 11 am

Wagner said the company is looking to hire new employees.

Waltz Soda Fountain, at 167 Main St. At Damariscotta, they are open from 11 a.m. to 4 p.m. Thursday through Monday. Closed on Tuesdays and Wednesdays.