Weddings are very expensive, with tens of thousands being spent on a regular basis. At many weddings, there is an unspoken rule that attendees must bring a gift or give money to the newlyweds.

However, is it acceptable for the bride and groom to assign their guests to attend?

Recently, a wedding invitation poster went viral on social media platforms as the groom and bride appeared Assigning their guests to attend their wedding.

The wedding ceremony is on December 25, 2022 at The Light House, Penang, Guests charge in terms of attendance, food and even taking a photo of the bride and groom.

However, if you give a gift to the newlyweds, Prices will be reduced by 50%.

Debate over whether or not that is reasonable

The poster made its way to social media and drew Mixed reactions from netizens. Some users praised the couple for carrying out the charges as it is only fair to do so, given that weddings have become very expensive.

They attended Support for the initiative and I wish this was more normal than it is now.

One user noted that Chinese and Korean weddings are similar. “Attendees pay for each table or header if they’re going to attend. So this table is theirs from start to finish. Guests pay to come. “

However, many users condemned this practice and said that it Contrasted with the idea of ​​holding a wedding in Islam for Islamic weddings.

“This is the opposite of what is traditionally practiced in Islam. You have a ceremony with Intention to feed people no matter if they are 100 or 1000 peopleOne user said.

Another said that if you can’t stand it, there’s no point in doing it. “Weddings are donations. If you want money (It’s better for you) to start a business and not a wedding. “

“Is this a wedding or a business? As if someone is sponsoring the wedding. Another user said.

Despite all the attention I was able to get, it was so It was revealed that the poster was fake. According to one netizen who contacted the hotel, they also confirmed the trick! Thank God, son! 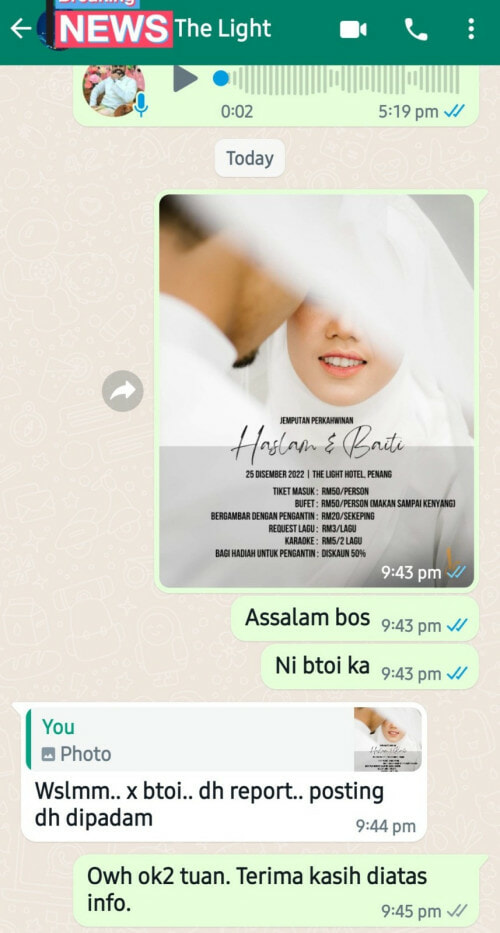 What do you think of this? Do you think it is a good idea to cost the guests to attend your wedding?